He already holds the record for the individual longest continual indoor row and this April he was back for more: Isaac Kenyon broke the tandem lightweight indoor rowing world record together with his mate Jordan Williams. On 1 April, the Brits started rowing and kept it up for 48 hours! Sounds incredible, but Isaac is known for taking on challenges that make your head spin. Be it completing a relay swim across the English Channel or rowing across the Atlantic Ocean — Isaac is pushing boundaries.

In this EXR Blog post, Isaac explains how he and Jordan approached the record attempt, how EXR helped them stay sharp and if he wants to get back on a rower ever again.

Most people spend about an hour per day on their rower. I know that compared to this, rowing for 48 hours sounds crazy, but in the past, I have done a lot of endurance rowing. I have a world record for the longest continual row on a Concept2 indoor rower which stands at 3 days and 11 hours. This was without sleep and only allowed for 5-minute breaks each hour to go to the toilet. I have also rowed across the Atlantic Ocean for 40 days in a team of four, rowing in shifts of 2 hours with 2 hours break consecutively 24/7 for the entire 40 days. This means ultra-endurance rowing is not new to me.

We had about 4 months to train for our record attempt.

Jordan is an old school friend of mine. He is a regular gym-goer who lifts weights and occasionally does cardio, but he had never rowed before attempting the world record. He wanted to learn to row so that is where the idea of doing an ultra-endurance tandem indoor row came about. I got the idea in December and we decided to make it official at the beginning of January. This means that we had about 4 months to train for our record attempt. Raising money in the light of the world autism acceptance week motivated us to pull through and so I started coaching Jordan, taught him the right mindset and gave him a training schedule to stick to.

It all depends on your mindset

Sitting on a rower for 48 hours can seem totally out of reach and also not enjoyable at all. However, it’s all in the mindset. If you break the 2 days down into manageable chunks and by “living in each moment”, you will find that it is possible to do. When I do ultra rowing, I think about the hour I am in, what I am going to do in this hour, how to improve my rowing technique, pacing, stroke rate and so on. I don’t think about hour 45, because as you can imagine, that can feel demoralising if I am on hour 5 of my challenge.

Another thing I like to do is think about the next snack break. We also developed a more positive attitude as we ticked off the milestones along the way: 30 minutes done, then 2 hours done, next 4 hours done,12 hours (¼ of the record), 24 hours (½ to our total), 37 hours (breaking the world record) and eventually 48 hours (setting a new record). On each milestone, we would think about how far we have come and not how far we still had to go (a glass half full kind of attitude) which led to being optimistic and more motivated.

Both Jordan and I invited lots of our friends and family to come and join us since we placed a second rower for visitors right next to ours. Their support provided us with a big boost as we always had someone to talk to during our world record attempt and that was a good distraction and a great morale boost. Also, the music that was played at the venue (a local 24/7 gym) mainly hyped us up, although it could get annoying sometimes.

Isaac (right) was joined by friends, family and the public to row and share the record attempt which was very motivating (Credit: Daniel Williams)

Especially during the night shift, it was great to row with EXR. The app engaged us during our training sessions and during the world record attempt.

We played EXR during our training sessions to prepare for the record attempt. (Credit: Isaac Kenyon)

EXR engaged us during our training sessions and during the world record attempt.

Rowing slowly but steadily towards the world record

One of the main factors we needed to consider was our rowing technique. We spent a lot of time concentrating on maintaining technique, as fatigue crept in and the temptation usually is to start arching the back and catching at a poor position. This then results in worse propulsion and poor posture. In general, we were thinking a lot about the main parts of the stroke which are the catch, the drive and the finish and not squeezing the handle too tightly as that is wasted energy.

We used two brand new Concept2 rowers to train and for the record itself. After running some trials, we decided on shifts of 2 hours and a pace of 3 minutes for 500 meters. We also used a very low damper setting of between 1 and 3, so not 10 (a setting which you often see in gyms) because it exhausts your muscles before you reach cardiovascular potential and basically burns you out.

We experimented with our nutrition and adequate hydration patterns since they are very important for sustaining energy. We found that having a snack every 30 - 45 minutes was the way to go. To reach the food from the erg, we had our food laid out next to us. Alternating we had 2- hour breaks and we spent most of those breaks refuelling. We mainly ate slow-releasing energy foods like bananas, oats, nuts (like almonds and walnuts), vegetables (for example sweet potatoes, red peppers, carrots) and brown rice. We drank around 1 litre of water (squash and electrolytes) every 4 hours (500ml during a 2-hour row and 500ml in the recovery phase).

Jordan is rowing. You can see some of the drinks and snacks surrounding the Concept2. It was a bit messy in this photo. In general, we were tidier than this (Credit: Daniel Williams)

Of course, drinking all this water meant that the first thing we would do in our breaks is run to the toilet as we would always be bursting after 2 hours on the rower. The second activity on the agenda was to do some rehab. This included stretches to reduce the lactic acid in our muscles and prevent us from being stiff for our next shift and reduce the risk of injury. We would then refuel with some nutrition and hydration, before taking a 1-1.5 hour nap in our sleeping back with a blackout facemask and earbuds. We would set an alarm to wake us up around 15 minutes before our next shift. Most of the time a foam roller or water bottle was thrown by the rowing person to wake up the off-rowing person because we were so tired and such deep sleepers. In these 15 minutes, we would then run to the toilet again to empty before another 2-hour session on the rower. Also, we would take in a little snack and some fluids and do a few mobility stretches. Before every switch, we coordinated with the witnesses to sign off that they saw the transition.

Isaac is relaxing on the camping bed while Jordan is rowing in the background (Credit: Daniel Williams)

How it feels to break a world record

Oh, when we passed the 36-hour mark and had therefore broken the world record, I was just so relieved! I was super happy we made it this far and it took a lot of pressure off knowing that every oar stroke or time on the indoor rower from this moment forward was going to be extending the new record. We had 48 hours in mind and planned to stick to our plan. Basically, we used the energy from breaking the record to extend the record. At this same point, we also had a celebration as we had surpassed our fundraising target of £1000. I noticed that Jordan was happy too but he stayed pretty focused on the ultimate goal of 48 hours.

Our highlights and hardships

I loved the sunrise moments when we got through the night. Probably due to the circadian rhythm, we would have far more energy during the day than at night. It was really good to be rowing with the window in front of us for the view and seeing the sky. The warm colours of the sunrise always gave us hope. Another great moment was when a sports therapist came and gave us massages and treatments halfway through the world record!

Although I knew what to expect, I found the early morning shifts when I had to get up at 2 am and 4 am to row for 2 hours extremely challenging. Because that is when your body's circadian rhythm is telling you that you should be asleep. Jordan said that he felt like a zombie when waking up for his next 2-hour stint and I agree. It was really mentally tough, especially in the second night when we were even more tired. 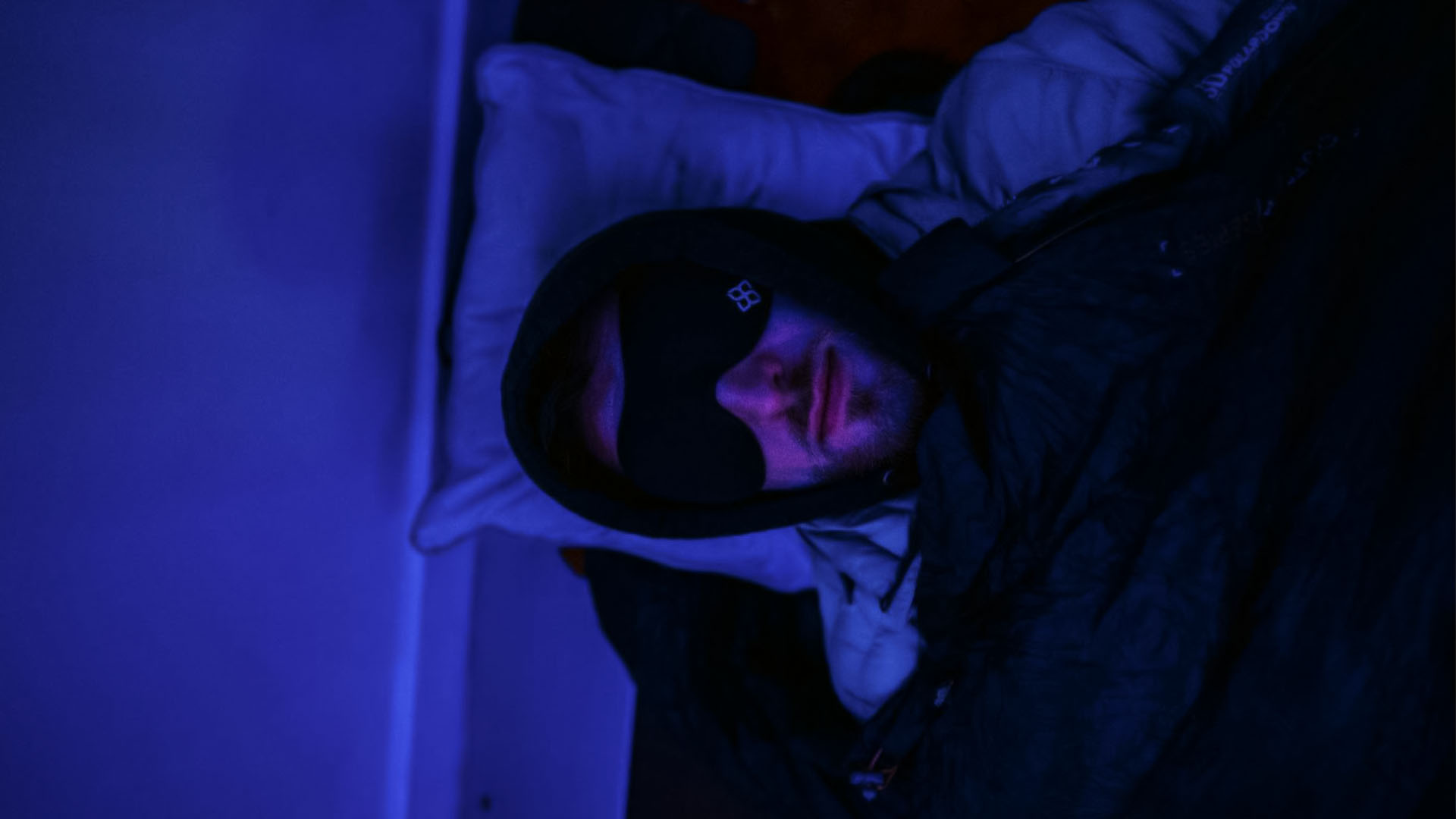 Isaac is recovering before his 2 am night shift is calling (Credit: Daniel Williams)

When the 48 hours were over, I was a little shocked, to be honest! I had just gotten my life into the swing of 2 hours of rowing and 2 hours off. I was settling into that routine and then we finished — ha! After breaking the record, I had to re-focus and adjust to normal life again. I was super chuffed that we did what we set out to achieve. It was a lot of effort and determination and it paid off by setting a new world record! Jordan even felt like he could have gone on for a bit longer — what a mad lad! 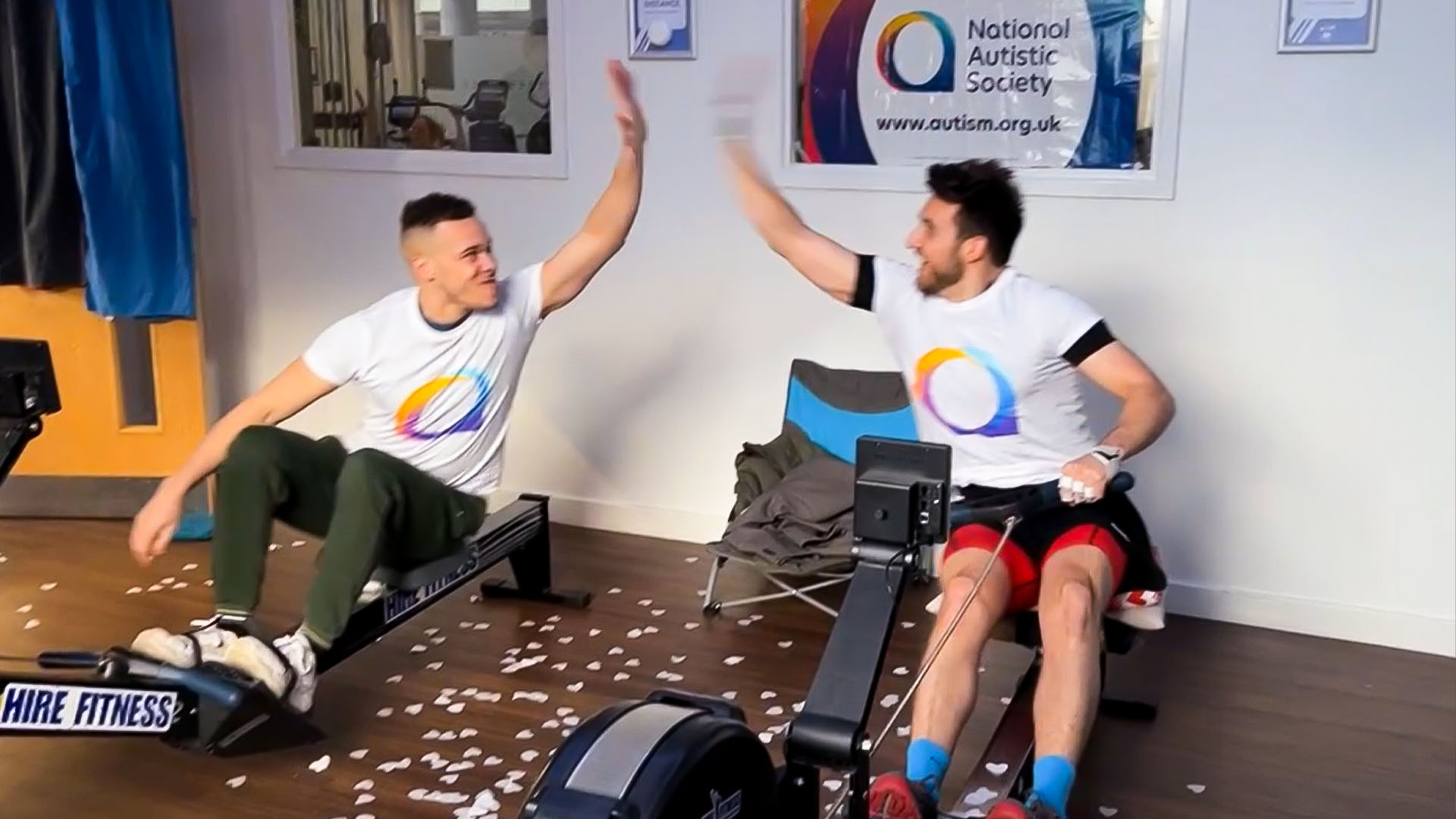 Jordan (left) and Isaac (right) high-fiving after reaching their goal of 48 hours on the rower (Credit: Daniel Williams)

We had lots of friends and family come for the last 30 minutes of the row to cheer us on and celebrate with us. Although we were drenched in sweat, we had some hugs and high-fives at the end. Straight away I grabbed a shower! Boy, did I smell, and everyone let me know about it too! After that, I had a beer and a huge dinner at a local restaurant before heading home for a big long 12-hour sleep!

I was super chuffed that we did what we set out to achieve. It was a lot of effort and determination and it paid off by setting a new world record!

Honestly, I would do it again! It is a great way to boost the resilience of the mind and also raise awareness within a local community. I have a few more world records I want to break and also set new ones. I am looking forward to going into the unknown for a few challenges and doing things I am not comfortable with to grow as an all-around adventurer and athlete. I think Jordan will do another with me (oops… spoke too soon)!

Visit Isaac’s homepage to learn more about his world records and charity work.

Enjoy instant access to all features during the 5-day free trial. Only days on which you row with EXR are counted.

EXR gets updated every month. Buy a subscription and never miss new content.